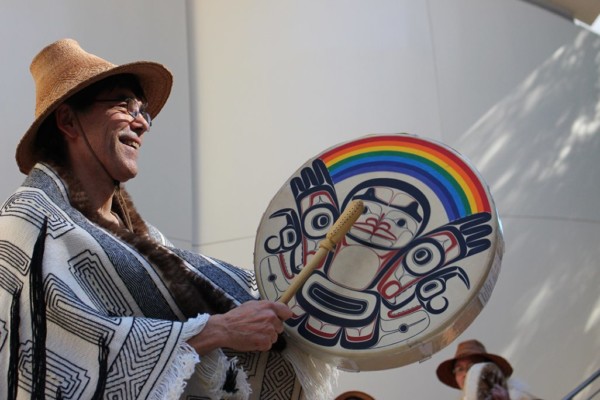 David Boxley is a carver from Metlakatla, Alaska. Born in 1952, and raised by his grandparents, he grew up among the Tsimshian language and traditions. After high school he attended Seattle Pacific University, where he received a Bachelor of Science degree in 1974. He became a teacher and basketball coach to Junior and Senior high students in Alaska and Washington.

While teaching in Metlakatla in 1979, inspired by his culture and the ability of art to preserve traditional culture, he began to study traditional Tsimshian carving. Through researching ethnographic material and carvings from museum collections, he learned the traditional carving methods of his grandfather's people.

In 1986 he made a decision to leave the security of teaching, and devote all of his energies to carving and researching the legacy of Northwest Coast Indian art. David has become a nationally recognized artist showing and demonstrating his art in many parts of the United States and Europe.  His decorative and functional art includes bentwood boxes, rattles, masks, prints and panels.  He emphasizes traditional Tsimshian style in his work, and he has started traditional Northwest coast dance groups, and organized and hosted Potlatches in Alaska and Washington.

In 1990, during the Goodwill Games, Boxley was commissioned to carve the crown of a "Talking Stick". His carving of a unified American Eagle and Russian Bear became a symbol of peace and harmony between the United States and Soviet Union. In the millennium year 2000, David was commissioned to carve a Talking Stick for the office of the Mayor of Seattle.  His art can be found in fine art collections worldwide.
More recently, David’s 22 foot commissioned totem pole titled “The Eagle and the Young Chief” was permanently installed at the Potomac Atrium at the National Museum of the American Indian, Washington, DC, 2012.

We are, and have always been, a sea going people. The relationship the ancient people had with the ocean was essential to not only trade and survival, but was one more connection to cultural traditions, oral narratives and life passages.  I am fortunate to carry Tsimshian culture in my art, performance, language and by passing it on through teaching other native people. Although making a living as an artist can have its ups and downs with the economy, I can't imagine a more fulfilling path. I am gratified to see my sons standing with me as artists, performers and the next generation of leaders for my people.

The Boy Who Fed The Eagles Totem PoleDavid A Boxley Sold

Raven and the Stars Paddle David A Boxley Sold

Everyday 11am to 5pmDirections & Parking